The Self-Defense Justification under ARS 13-404

Where does “self-defense” stop… and “assault” (or worse) start?

SUMMARY: This video explains the use and limits of the justification under A.R.S. 13-404

Arizona law affords you a very strong protection under the self-defense justification, and many situations of assault, aggravated assault, and domestic violence, there is a component of self-defense.

ARS 13-404 states: “A person is justified in threatening or using physical force against another when, and to the extent a reasonable person would believe that physical force is immediately necessary to protect himself against the other’s use or attempted use of unlawful physical force.”

The text hinges around key words that need to be fully understood before going to Court and defending oneself using the self-defense justification. The notion of “reasonable person” is one of them. The other key word is “immediately“. When these notions are in play during a confrontation with acts of violence, one of the parties is probably entitled to invoke self-defense under ARS 13-404.

There are exceptions to the law, however; events that the law purposedly excludes from its purview. “Resisting arrest” is one of them. Likewise, one can’t invoke this law when one started or provoked the fight. These exceptions must be well understood before alledging self-defense before the Court if you have been arrested for assault, aggravated assault, or some act of domestic violence.

One very serious aspect of the law that I don’t cover in this video is the “use of deadly force”. The use of deadly force is a complex matter, and the stakes are very high. If you found yourself in a situation where you used deadly force, I recommend that you contact my office as early as possible to discuss the case and the law. This is not a topic to be taken lightly.

Click on the image below to watch the video (4:43) 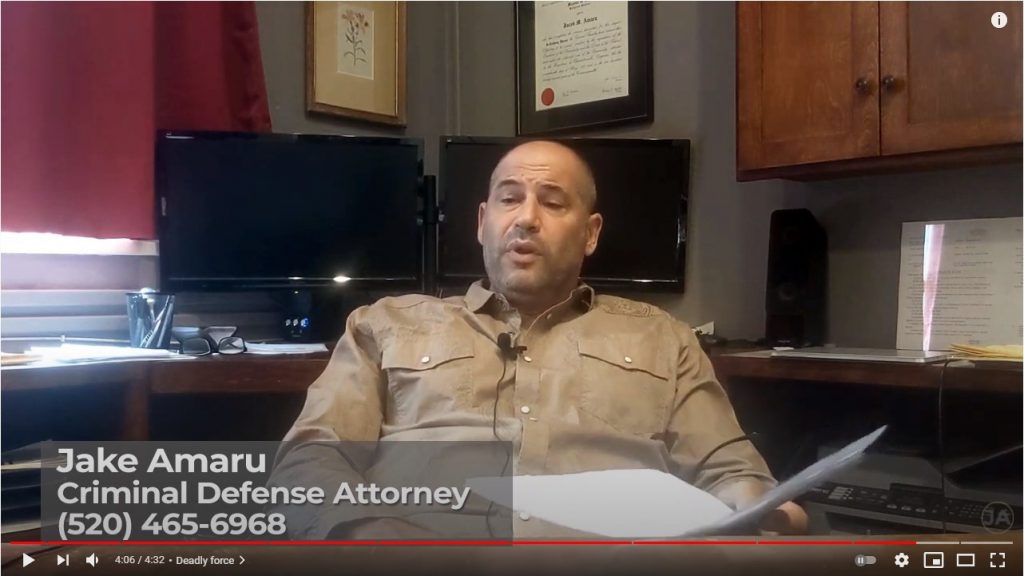 Transcript of this video © 2021 Jacob Amaru

First, when we talk about justification in criminal law, we’re referring to self-defense, duress, meaning you had some sort of pressure from some sort of source to act in a certain way; or a necessity, which is that you had to do it because something bad was about to happen to you otherwise; and then self-defense.

So, what I want to talk about is self-defense, because it is something that comes up quite a bit as a defense for cases involving aggravated assault, assaults, fights… Many times, even domestic violence cases have a component of self-defense.

Self-defense means exactly what it sounds like. If someone is attacking you, you’re allowed to defend yourself. However, Arizona law – which gives us a great self-defense Statute – also basically states that certain specific things have to happen in order for you to be able to use that as a defense in your case.

I want to read you the Statute and talk about that.

It is Arizona Revised Statute 13-404, and it says that: “A person is justified in threatening or using physical force against another when, and to the extent, a reasonable person would believe that physical force is immediately necessary to protect themselves against the other’s use or attempted use of unlawful physical force.”

The other big word is “immediately”. That has to do with the sense that the threat has to be right in front of you; it has to be an immediate threat. If you’re in a fight with somebody and they’re throwing a punch, you’re allowed to defend yourself. But if you get into an argument with somebody, and then it’s over and two months later you see them again, you can’t walk up to them and punch them in the face and be like “Well, I was defending myself because we had a fight two months ago…” There’s no immediate sort of danger that’s in front of you.

Now, there are some exceptions that are really important to know about too. You’re not allowed to use it to resist an arrest, and you’re not allowed to use it if you provoked the fight. If you start a fight with someone, you can’t turn around and be like “Well, I was acting in self-defense”. Now, if you start a fight and then you walk away from that fight and that person continues to pursue you, then you could use self-defense. But it’s important to know that you can’t use self-defense for every single situation you might get yourself into.

Self-defense carries over into a lot of different areas. You can use self-defense to argue, if you saw, say, someone else fighting and you wanted to render aid to that person; that’s “defense of a third person”. Or if someone stole some property from you, you could use defense or threatened force to retrieve that property. To protect your house, you could use self-defense.

Now, we also have the “use of deadly force”. But I don’t want to talk about that because it is really complex and the stakes are very high.

I appreciate you listening to this and I look forward to talking to you and trying to help you on a case if you’ve gotten yourself arrested. Thank you.