Dismissal of an Order of Protection

Order of Protection: Can it be dismissed?

SUMMARY: In this video, I discuss the issue of getting a court to lift an order of protection in Arizona.

As a criminal defense attorney, I see clients who have been slapped with a restraining order just because someone wanted to get back at them. These measures are easy to obtain, and difficult to get rid of. Considering their far-reaching implications — In Arizona, three violations and this becomes a felony case — it can be really necessary to review the circumstances in which these orders have been obtained, and plead a dismissal case before the Court.

Orders of protection and restraining orders have a perfectly good use in our system, but they have to be justified by the circumstances. Here I explain a case in which a client of mine had been slapped with an Order of Protection that was not deserved.

If you find yourself in this predicament, it could become really important for you to have the issue reviewed by a competent criminal defense attorney. Whether you get your case pleaded by me or not, I would kindly advise you to consider having it reviewed before the trials of life make things more complicated.

Contact me at my office in Tucson: call 520-465-6968. I am a trial lawyer, and I will go to bat for your case if I take it up. I plead cases in Tucson metro area and Southern Arizona, including Bisbee, Nogales, Casa Grande and Sierra Vista.

Today I’ll talk to you about orders of protection, and how to defend yourself against a situation where someone filed an order of protection against you.

Orders of protection are really easy to get. It’s an ex-parte hearing, which means that it’s just that person and the judge. Judges tend to grant them, because they’re just trying to give the person the benefit of the doubt and make sure that they don’t make a mistake. So they’re easy to get and they’re a lot harder to get rid of.

So his burden of proof to prove up that this act of domestic violence occurred is low. It’s the same as “probable cause” for the Police to arrest you. In some circumstances, an order of protection implicates your gun rights, meaning your Brady rights, so you could be ordered to turn in your firearms. 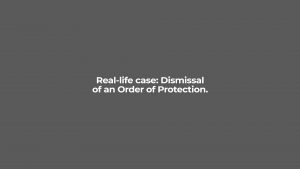 Let’s talk about a case I had, a good example of why you should challenge an order of protection. This one involved two roommates. They were both students at the U of A. The reason why an order of protection was granted was because of the fact that they were roommates, which meant that they fit into a certain test of what’s called the relationship test: one of the parties has to either be a family member or a roommate or a loved one. So it’s not necessarily someone like a boyfriend or girlfriend that you’re dating. If it fits into the relationship test, the grieving party can get an order of protection.

In this case, these two roommates had gotten interested in the same girl. And she had chosen my client and the other boy got very jealous. The two of them started texting back and forth. And the other boy ended up filing an order of protection against my client.

In those communications, there was a lot of things that were kind of things that you would expect for 20-year-old guys to be saying, and we challenged the plaintiff on the basis that there was not a real reason for him to be threatened. It’s called the true threat doctrine, i.e. a threat has to be real.

By way of example, if you are in a bad mood and you’re arguing with your wife and you say “I feel like cutting your head off, I’m so annoyed with you”, that’s not a true threat. That’s just you, sort of venting.

So the judge dismissed that order of protection, allowed my client to go back to his housing, and it was also really important because of the fact that they were both students on the same campus. Had he, say, walked into a bar and had a chance encounter with the other student, that could have been construed as a violation.

And so there was 100 reasons for my cient to have that order of protection removed, because the chances of him violating it were very high given the proximity in which they had to each other.

If you have more questions or if you have been served with an order of protection, please call me and contact my office. I will do my best to help you.