Clearing a record from a wrongful arrest in Arizona

In this video, I cover why an arrest could have been wrong, and I explain a case which I defended, where a record was cleared and sealed (even from the view of law enforcement) years after a wrongful arrest in Tucson.

Because of the repercussions that criminal records can have on your capacity to be gainfully employed in Arizona, there is no reason why you would not ask the Court to clear such an incident from your record, assuming the arrest is proven wrongful in the first place.

If this is a situation applicable to you, I would definitely recommend that you contact my office to review both the nature of the arrest and the clearance case. Don’t let these things hang over your head when this is not right and the law provides a remedy for it. Call my office for a free first consultation.

Let’s talk today about getting an arrest record sealed.

Unlike a lot of States, Arizona does not have an expungement statute. And so if you get yourself into a situation where you are convicted of a crime, there is no way to have that conviction completely erased off the record.

But we do have a statute that allows you to get an arrest removed from your record. And in order to do that, you have to show that you were wrongfully arrested.

Wrongfully can mean that there was a legal issue, meaning some sort of constitutional violation with your arrest; or a factual wrong, meaning, for example, that they just arrested you for the wrong person that day. 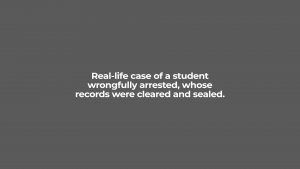 Let me give an example of somebody that I recently represented on this. This was a college student who, back in 2016, had come back to his dorm room and found that his roommate had broken his belongings. He had then confronted him and the roommate attacked him.

When we represented him on this case, ultimately, the State agreed that this was not something he should have been arrested for, and so they dismissed his case.

Flash forward several years later, he’s graduating from college, and he’s in the job market. He did not want an employer to find that arrest, so he contacted me again, and we moved to have that arrest sealed.

Essentially, the Court found the same way: that this was a situation where Arizona is a stand-your-ground State, and if someone is assaulting you, you have no duty to retreat.

Because he was just defending himself and defending his property, he never should have been arrested. And his arrest has now been sealed.

If you’re wanting that type of relief, please contact me and I will set up a free consultation for you, and discuss your case with you.